UNSW Eastern Suburbs Bulldogs have once again proved their dominance in the Sydney AFL, finishing the season with a spectacular 3 Premiership titles and 1 Runners-Up.

In the Men’s Premier Division, UNSW-ES claimed victory over long-time rivals Sydney University on Saturday in a nail-biting contest (10.9. 69 - 6.15. 51). The Bulldogs did not disappoint in this repeat of last year’s decider, with the win representing a back-to-back premiership over USYD.

Both teams shot out of the blocks, with the intervarsity opponents presenting a ruthless fight. The crowd proved to be strong supporters of the Bulldogs, showing no remorse as a Sydney Uni player was sent off for ten-minutes during the match. Little separated the two teams in the first quarter though, with the Bulldogs scraping ahead 15-14. The arm wrestle continued into half-time, with USYD gaining a 6-point lead, but the Bulldogs rallied together to dominate in the end with a wire-to-wire finish to the season.

UNSW-ES also pinched the premiership in the Under 19s Division One, beating the undefeated Growthbuilt Sydney University boys at Blacktown last weekend. Despite Sydney Uni being crowd favourites, the talent and determination from the UNSW-ES side shone through to defend their title from last year. After a tough contest in the first quarter, the Bulldogs broke away from their competition to forge an 11-point lead after the second quarter. The team held onto this momentum to take the victory with a final score of 10.6. 66 - 4.8. 32.

The victories continued in the Div 2 Grand Final, as UNSW-ES defeated the St George Dragons to take the Premiership. There was plenty of pressure on the Bulldogs with the Dragons taking the lead at the onset of the last quarter but they fought back to triumph 8.12. 60 to 8.4. 52. This win was undoubtedly poignant for Troy Luff (former Sydney Swan) who won his first Premiership after playing in ten grand finals. The Bulldogs also put up a strong fight in a competitive Div 3 Grand Final, but were narrowly defeated by the North Shore Bombers, with a score of 3.10. 28 to 3.6. 24 by the final siren.

What a club! An unbelievable display of footy over the last two weekends resulting in three Premierships. UNSW Eastern Suburbs Bulldogs continue to produce high quality sportspeople that are passionate about footy and determined to succeed. Hats off to Club President, Stephen Dunkley, whose tireless leadership is undeniably respected within the club. Congratulations to the Bulldogs players, coaches and support personnel for an incredible season across the board!

The club continues to climb from strength to strength, being awarded the distinguished Club Champions trophy at the 2019 AFL Sydney Phelan & Mostyn Medal Awards Night. This accolade acknowledges the overall achievement of the Bulldogs across their teams, undoubtedly a legacy that will live on as the club celebrates 140 years in 2020. 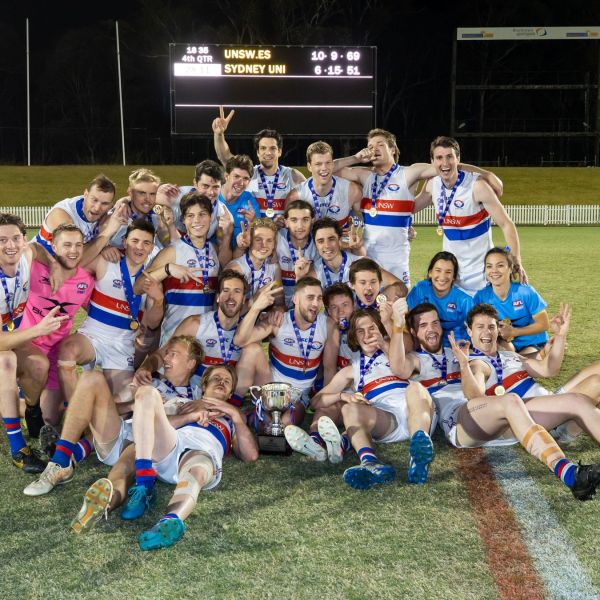