Sydney artist Oh Boy is no stranger to collaborations.

From Mallrat and Cub Sport, to Ninajirachi and Golden Vessel, he's worked with some of Australia's biggest up-and-coming acts. Now he's about to release his debut EP Brentwood Heights, cementing his position in the Sydney scene. He answered some questions about his new track 'Talk To M333', watching a sold-out theatre sing along to his song, and his goals for Brentwood Heights.

‘Talk To M333’ is a bit more R&B-esque than the songs you’ve released in the past. What was the process behind the track?

It is! I’m from a Polynesian family and we grew up listening mostly to a mix R&B, Soul, Hip-Hop and Reggae so I feel like those genres are my musical foundations and my roots and that was what I was channeling when I wrote the Brentwood Heights EP. The process behind 'Talk To M333' literally involved a bunch of my friends and my self. It originally started with Golden Vessel and I writing a song at Tasker's house, who eventually jumped in on the song to play bass, we then got some guitar from Blessed, additional prod from my housemate and fellow producer Tanssi, we then found Oordaya who's a French artist and added her vocals, and finally LOVER (who's also my housemate) recorded his vocals on it as well.

What can we expect to hear on the new EP?

The best representation and expression of myself as an artist so far. I think it’s soul filled music, just my friends and I creating something we resonate with collectively.

What are your goals for the EP?

The initial goal I had for the Brentwood Heights project is already complete. It’s self help, I wanted to be more confident as a person and to better believe in myself. I think I’ve accomplished that, I think this project is showing myself to the world for the first time through a message, and it’s a message I want everyone to interpret in their own way.

I want to contribute to the rise of the planet’s collective consciousness.

I noticed there’s a collab with Cub Sport on there. How did that come about?

I’ve been friends with Cub Sport for a while now and we had planned on writing some music together so I sent over the instrumental for 'Angels 888', and asked if Tim could lay down a few hums or something over it as I didn’t initially expect lyrics or anything for that song because I was finding it hard to convey the exact message I wanted to send in words. Tim sent back an entire top line and covered every concept and message I wanted to send, it was magical - I cried when I heard it. We want to raise the vibration.

I saw you were at Mallrat’s show the other night when she played ‘Bunny Island’. How was it to see the crowd go off like they did to your track?

It feels surreal honestly. I’m so grateful I get to be able to experience these types of things. I was also dancing really funny from the crowd to Grace as she performed it and accidentally made her laugh mid verse hahaha.

You do a lot of collabs with other artists. How do you choose who you want to work with?

I really only work with friends! In saying that though I make new friends like everyday. I just need to connect with someone on a deep enough level to be able to create with them and make something we believe in together. It’s a natural and honest process.

Definitely more music, I’ve got quite a lot storing up in my computer at the moment. I’m releasing a visual concept to go with the EP so definitely a lot more content but in a few different creative avenues. More clothes too, I love designing clothes.

Oh Boy's Brentwood Heights EP is out Friday 3 May. 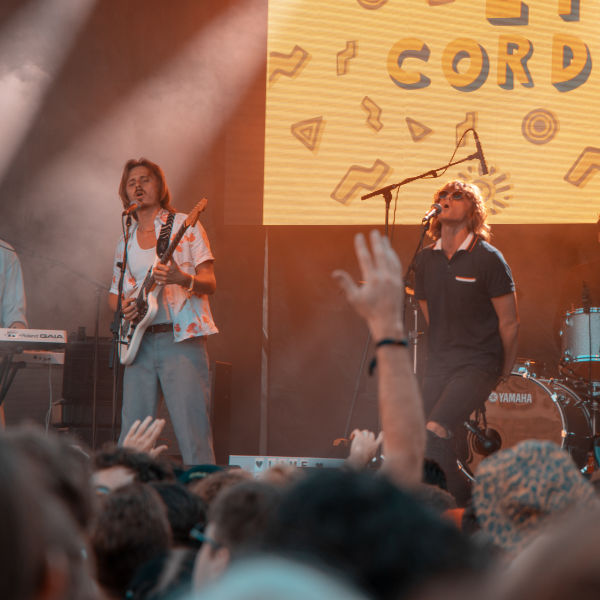