A Rough Guide to: Alternative Anime

Does Anime normally leave you feeling like you don’t quite get it? Are you tired of all shows looking the same and their obstacles being overcome with nothing but the power of friendship? Don’t worry, we’ve got you covered

Anime is a vast medium that includes a variety of shows, themes, genres, and styles of animation, but that stuff can be hard to find if you don’t know what you’re looking for. This is a rough guide to the kind of thing that doesn’t get a lot of mainstream attention; weird art styles, complex and subtle characterisation, a lack of belief in the power of friendship - that kind of thing.

If you liked: Sharp Objects, The Virgin Suicides, Fight Club 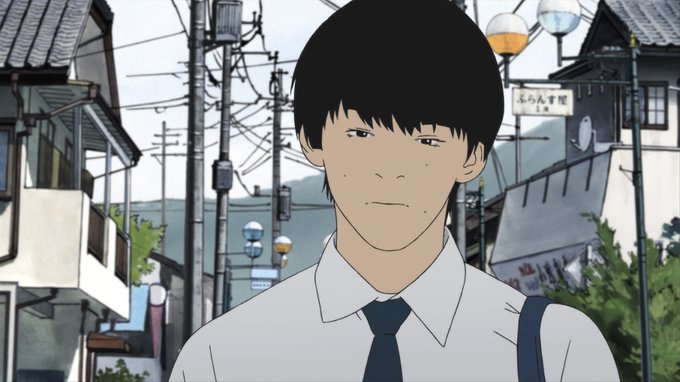 An adaption of the manga by the same name, Aku no Hana follows Takao, a shy, bookish teen who’s alienated from his parents, his friends, and the small town he lives in. The town's other teen outcast, Nakamura, takes an interest in him, blackmailing him into a series of escalating psychosexual tasks and pulling him further into alienation even as he starts to get more and more involved with the social world of his school.

This series just drips with tension and menace. The town seems overrun with weeds and rust, and the sky is always fenced off behind telephone wires; the characters all seem just a little grotesque looking. This is a good point to talk about the most unique part of the series, the animation style. While most animation is hand-drawn and then layered over the backgrounds, Aku no Hana uses rotoscoping (the technique of filming live actors, and then drawing over their bodies and movements) to create an uncanny combination of human movement and mannerisms with animated designs that heightens the mood of unease.

The story runs on this tension, every moment full of potential for things to break bad or at least the feeling that things might. Even the scenes that go well still ratchet up the tension, adding another plate to spin or revealing an aspect of the narrative that further complicates Takao’s situation, building and building and building up to a final moment of violent catharsis.

If you liked: Groundhog Day, the writing of Haruki Murakami 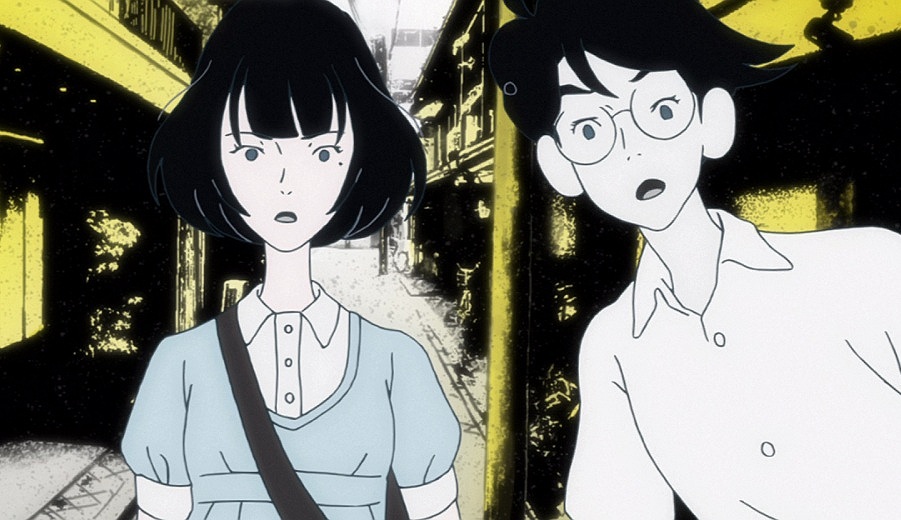 If you’ve ever felt like you’re not living your best uni life, this one’s for you. A magical realist series set in Kyoto, The Tatami Galaxy follows a nameless 20-something on his journey looking for a ‘rose-coloured campus life’. Honestly mood.

Each episode follows the course of a year in his life at uni and the adventures he has in one club or society, with time rewinding at the end of each episode after his hubris and self-centeredness has cratered any prospects he had of happiness in some comical and ironic fashion.

Over the course of 12 loops we’re introduced to Ozu, his demonic looking best friend and all around bad influence, Higuchi, a robe-wearing 8th year prank master and self proclaimed god of matchmaking, an underground student council secret police that moonlights stealing the bikes of students, and other similarly colourful characters and groups.

The art is incredibly expressive, with characters swallowing food whole and it bulging out of their throat, or the main character getting blocky and robot-like when he has to talk to the girl he likes. Every scene is full of energy and side references to other episodes or little comments by the narrator that fill the show with such a density of things to engage with.

Even if you don’t like a certain character in a scene, you’re still going to be impressed by the way that they’re animated, or the blend of photography and animation cells collaged into the background, or they’re going to tie the current plot back to something that was hinted at episodes prior.It’s weird and fascinating and a little bit wacky, and if you need to feel better about your uni years having not been mind-meltingly incredible so far, you can chuck this on and at least feel happy you’re not the main character.

If you liked: Knives Out, Sherlock Holmes, Normal People 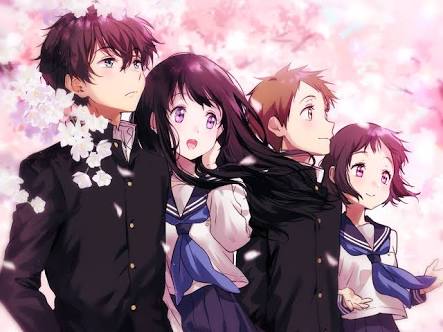 What would it be like if a teenage boy had Sherlock Holmes’ powers of deduction? That’s the question posed by Hyouka, and it turns out he probably wouldn’t do much except sleep and have other people drag him into their interpersonal relationships so he can solve really minor mysteries.

It doesn’t sound very exciting and honestly it’s not going to set your brain on fire with curiosity, but the mysteries are well written, and as the main character continues to be pulled out of his shell more and more, you really start to get an understanding of his developing sense of morality as he comes into conflict with the people around him, his ability to read situations gradually revealing the petty heart of small interpersonal betrayals and forcing him to engage with the social world that he’s been trying to hold himself apart from.

This is the most traditionally animated show on the list, but it serves as an example of what good direction and aesthetic looks like. Every frame of this show drips with a warm sense of comfort and nostalgia; rooms are panelled in dark wood that shines in the magic-hour sun, warm earth tones mixing with warm lighting, hints of desaturation creating a sense of distance between the characters we watch and the world moving past around them.

When I compared Hyouka to Normal People at the start of this section I wasn’t totally joking. While it doesn’t have the moment to moment drama and sex appeal of Normal People, Hyouka’s strength is in the way it uncovers those small moments of friction between people not in screaming matches or fistifghts, but from a position of detached compassion looking over the fallout.

If you liked: Avatar the Last Airbender, Pirates of the Carribean, Westerns and Samurai films 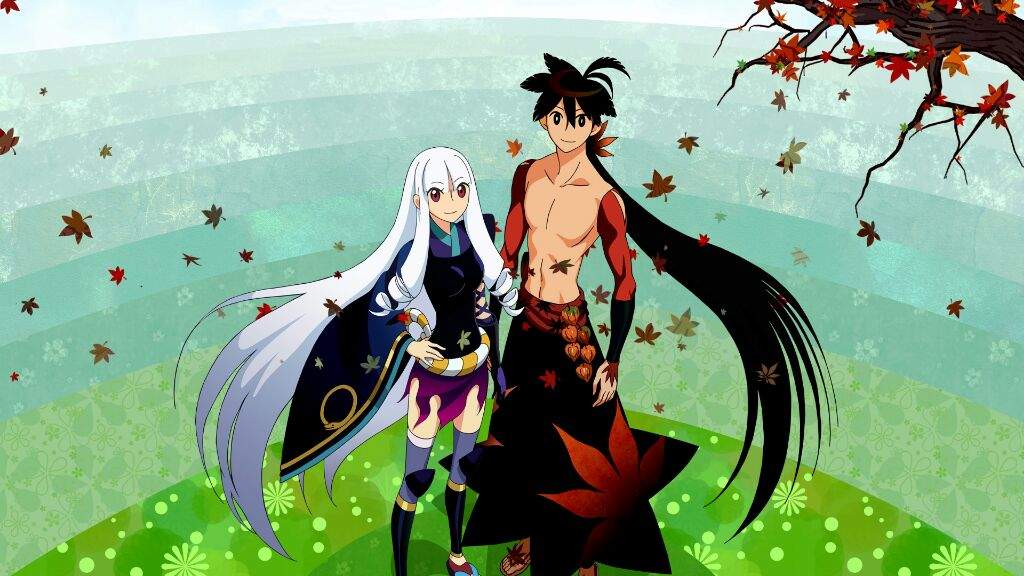 Originally aired monthly, this 12 part series is unusual for having 50 minute episodes as opposed to the more regular 24. It’s based on a series of light novels by prolific author Nisio Isin (also the writer behind the Bakemonogatari series). It combines elements of adventure stories, fantasy, and western/samurai films, following Yasuri Shichika, a living weapon, and Togame, a strategist working on behalf of the shogunate, as they travel around japan on their journey to collect 12 legendary swords and bring them back to the newly appointed Shogun. Even though it’s a relatively light-hearted adventure story full of colourful character designs and Nisio Isin’s trademark love of puns, the story leans into its themes, becoming a complicated and affecting story about duty, love, obligation, power, and how those things can intersect.

Each episode is centered on the recovery of one legendary sword, and the various moral questions that crop up regarding its use, the perspective of the current owner, and questions of power in general. What does it mean to own a weapon? Should anyone be allowed to have that power, or should it be concentrated into the hands of the state? How does having power over other people change how you think about them?

The image of the sword as a weapon is, in both European and Japanese contexts, a result of a long history of class-stratification. Not many people could afford to buy themselves a sword, and those that could were usually members of a ruling class of nobles or their immediate employees, so what does it mean when something that is a symbol of the martial strength of an established social order falls into a commoner, and are the people trying to return it back to hegemonic control doing it for good reasons? 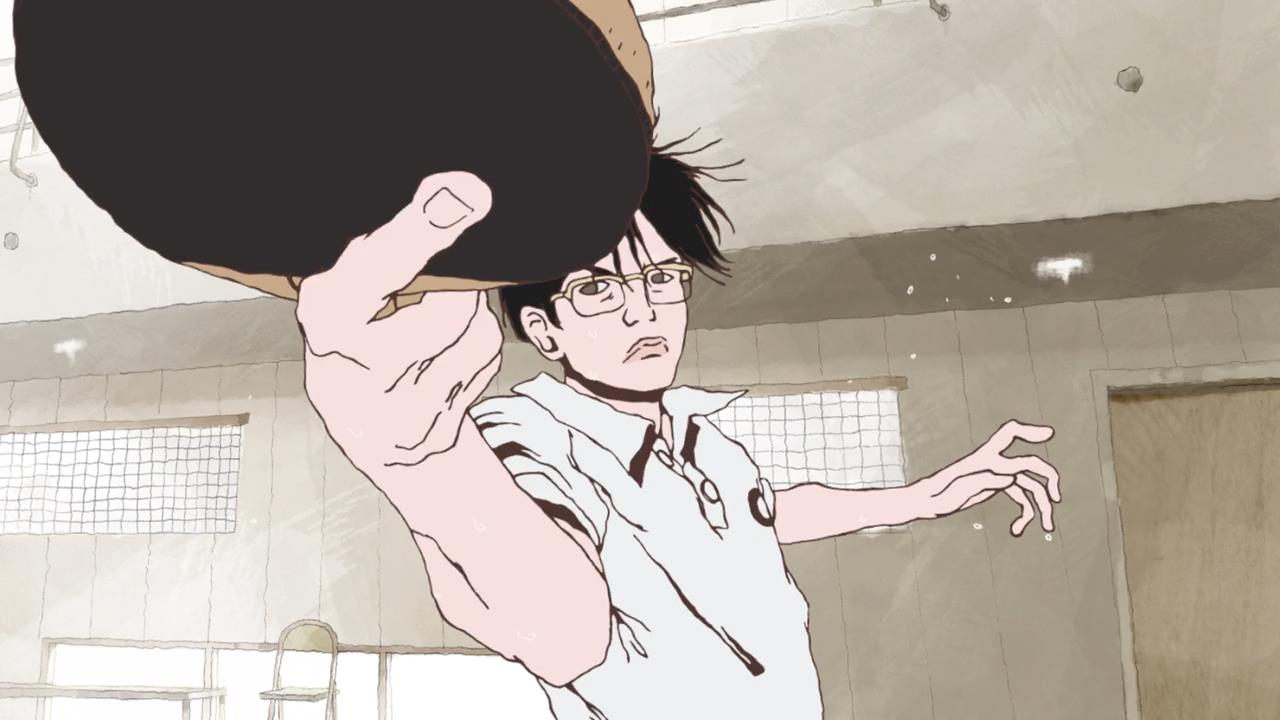 Don’t let the rough look scare you off, Ping Pong the Animation is one of the best sports anime ever created. Adapting both the story and art style of the Ping Pong manga by Taiyo Matsumoto, it follows the high-school ping pong careers of two friends, Smile and Peco. One stoic and emotionally repressed, the other carefree and vivacious, the series delves into their differing approaches to the sport and to life in general, seeing how they grow and change within the crucible that is high school ping pong.

Ping Pong the Animation is one of those pieces of media that really gets the feeling of being a teenager. The simultaneous lack of expectations and crushing need to live up to them, those awkward conversations you have with friends where no one quite knows how to talk about their feelings yet. Peco is entirely that one friend you have who’s always got some dumb little idea you need to talk them out of before they do something stupid, and Smile is the other one who just wish would come out his shell a little more. It’s an anime that climaxes with a sport tournament, but it understands that what we care about are the players, not necessarily the sport.

You’re here to watch these characters come into emotional conflict, the ping pong is just a medium and a metaphor, a dynamic and visually striking metaphor, but it’s not really the point. It’s the way by which we can measure a character’s growth as a person, how their feelings about other characters have changed, or how they’ve failed to evolve. This isn’t a new concept, pretty much every sports story tries to create a greater sense of emotional stakes than simply winning or losing, but Ping Pong the Animation does it with such a sense of pathos, tenderness, and intimacy.