Call Me By Your Name (Montero) by Lil Nas X

From the Man that took you down the “Old Town Road” to cosplaying Nicki Minaj in the most Barbie-licious fashion comes Montero (Call Me By your Name) .

Whilst some praised the track and music video as an expression of freedom and queerness, others had more extreme thoughts on this. From ex-basketball star Nick Young to conservative black politician Candace Owens to Tennessee pastor Greg Locke, social media quickly flooded with responses both euphoric and scathing. 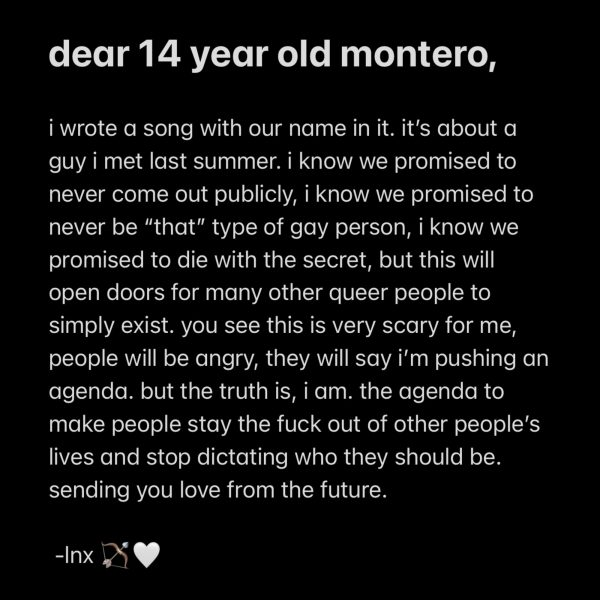 The letter Lil Nas wrote to his 14 year old self to highlight his musical and personal journey and embrace his queer self.

The song’s title references Lil Nas X’s real name, Montero Lamar Hill. The track first surfaced as a snippet on Twitter and also appeared in a Superbowl ad in February 2021 which caught fans’ attention thanks to its catchy beat and repetitive ‘Call me by your name’ catchphrase on the hook. They say that ‘If it ain’t broke, don’t fix it’ and this is true to Lil Nas X’s partnership with producer Take A DayTrip who has produced a few of his other chart topping singles including Rodeo and Holiday. After listening to it for the first time, it was clear to see a likeness to that of the late great Juice Wrld and even the melodic trap sound of Iann Dior who has become a popular figure in modern pop-RnB.

The track was great but what garnered people’s attention was the music video. The provocative video shows Lil Nas in various mythical, religious and historical settings. From sliding down a stripper pole to hell to giving the devil a lap dance and then killing him, this video is an ensemble of religious and political controversy. However, as of its release on March 26, 2021 the music video has garnered a little over 34 million views which goes to show how influential this video was and still is. 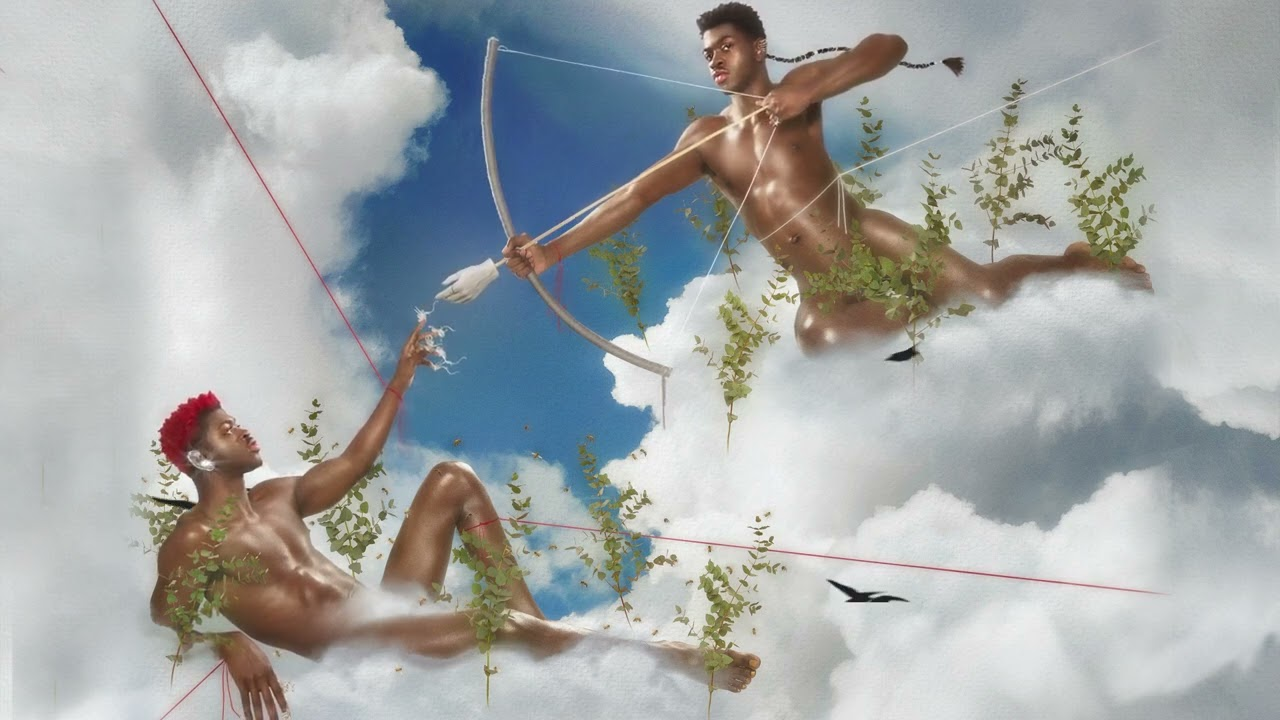 Lil Nas X later partnered with MSCHF, a company known for making viral products. Together they created a special edition of Nike Air Max 97’s known as the ‘Satan Shoes.’ These shoes had a number of distinctive features including a vial of blood and a stitched version of the Bible Passage Luke 10:18 which reads: “I saw Satan fall like lightning from heaven.” The shoes were priced at $1018 and sold almost instantly. However, as these were modified nikes and not officially sanctioned, the parent company did not appreciate their product being tainted and filed a trademark infringement claim. After a brief court battle, on April 8, MSCF was forced to recall the shoes as part of the settlement 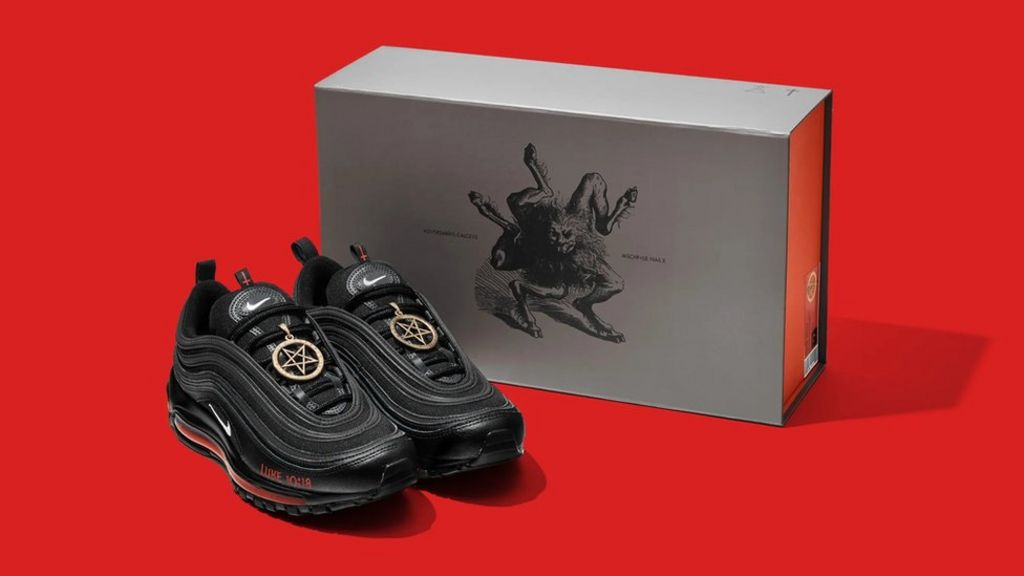 Satan Shoes: Complete with a vial of human blood, a Pentagram and the Luke 10:18 verse

The 21 year old rapper has been known to be a notorious troll and twitter prodigy ever since his days as an admin for a Nicki Minhaj Stan account which was why he was the perfect queer hero to stand up to the keyboard conservatives. Ever since his breakout single “Old Town Road’, which went viral via TikTok in 2019, Lil Nas has developed a dominant audience of pre-teenagers and children. However, with music videos like this one, he is seemingly exposing his core audience to mature content. 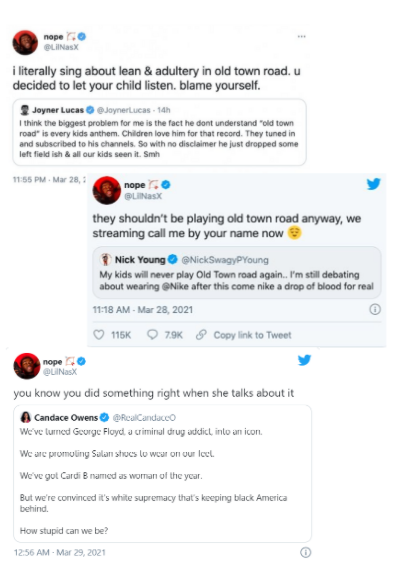 Despite the factual but harsh clapbacks, there were moments of reflectiveness where he says that “I spent my entire teenage years hating myself because of what christianity taught about homsexuality.” In a way, this song was a way to express himself and did in fact generate praise from a number of high level individuals.

TikTok was another platform which Lil Nas capitalised on. From roasting himself and the famous ‘pole scene to hell’ to reposting recreations of the music video or memes, the marketing of the song was immaculate. Furthermore, the fact that the controversy surrounding the song made it to mainstream media helped boost the song’s popularity and streaming numbers. Therefore it is no surprise that the song debuted on number 1 on the Billboard hot 100 (his second top 10 after Old Town Road) and simultaneously charted in the top 5 in the UK, Norway, Canada, Australia and New Zealand. This song has had a global impact and has acted as an amplifier for the queer community no matter what critics have to say about it.

“The world’s going to keep spinning. But I can do what I want in my own artistic career at all times or I’m going to fail, for me at least.” (Lil Nas X via The Zane Lowe Show)

For myself as a casual viewer, the music video was borderline derogatory and NSFW. However since I consider myself a disciple of pop-culture, this song was a display of confidence and self-expression. From production to the vocals, this was catchy and extremely marketable in a modern day and age where hybrid sounds rule the industry.

Will the song be removed from streaming services due to its controversial nature?

Only time will tell.