It is yet another teen-mum and parentified daughter, coming of age tv show, but with murder thrown in for a twist. To draw comparisons between Netflix’s Ginny & Georgia and the iconic 2000s Gilmore Girls or the complex edge-of-your-seat drama How to Get Away with Murder, would be a great insult to those shows.

An angsty 15-year-old, Ginny Miller (Antonia Gentry) seems to feel nothing but contempt for her 30-something mother, Georgia (Brianne Howey), as she and her half-brother, Austin (Diesel La Torraca), are moved yet again to a new town and new schools. Ginny struggles with thinly veiled racism and constant microaggressions while trying to find a place in her new home, and finds herself torn between two boys. She's threatening to repeat her mother’s flawed romantic history. Meanwhile, Georgia’s dark past starts to catch up with her even as she uses her Southern charm to wrap Mayor Paul (Scott Porter) around her finger and establish herself within the community.

While the premise of the story may sound interesting, this series sorely misses the mark by trying to be too many things at once and results in a thematically broad but severely underdeveloped concept. Over the entire season, the mother-daughter relationship which one would expect to be at the heart of the show, barely progresses beyond the initial tension which hardly counts as a meaningful relationship. Georgia’s criminal background and troubled family life that suddenly turns the fluff piece into a crime drama is barely dealt with. This lets down what would have been a really interesting idea if less time had been spent on repetitive and unoriginal teenage drama. And even then, it does a poor job of addressing key teenage concerns like Ginny’s self-harm and her friend Abby’s (Katie Douglas) body image issues. 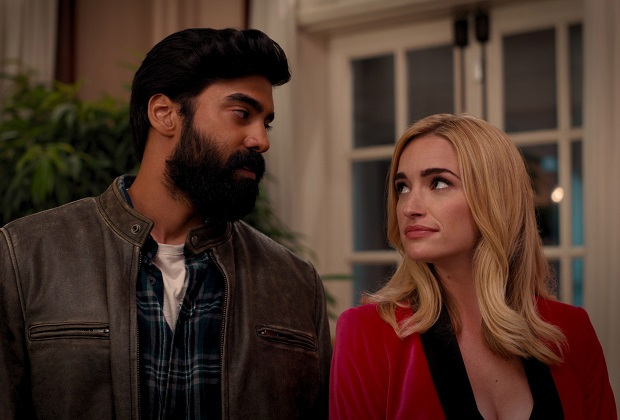 As is increasingly common in movies and TV shows, Ginny & Georgia also finds itself hyper-focused on selling sex and clichéd love triangles The shock factor of introducing new and exciting plot twists are left confused and unresolved instead of coming up with enough of a plot to fill ten episodes of screen time. With two leads who are, at times plain cruel and terrible decision-makers with a penchant for lying to everyone including themselves, it is hard to feel for either Ginny or Georgia, making these antiheroes and thus the show unlikeable in turn.

At the very least the series does not shy away from difficult topics like racism. Ginny has a rather poetic and relatable rhyming rant in Episode 8, spurred on by her father’s passion for art, about the struggles of mixed-race individuals to fit into either race. Ginny & Georgia also makes an excellent point about the ‘oppression Olympics’ that can occur between the races, when Ginny and her also mixed-race, kind-of boyfriend Hunter Chen (Mason Temple) finally have it out about how Blacks can perceive themselves superior to Asians for having faced more oppression. Yet the inclusion of people of colour still feels tokenistic, as does the LGBT presence, with the struggles of these groups appearing to be more of a political-correctness-check-the-box thing than an actual exploration into the complexities of life for marginalised individuals.

This series presents itself as an interesting if underdeveloped idea that is a bit of a letdown in this first season, although it has great potential for character growth and plot development that will hopefully be addressed in future seasons. If you’ve run out of options, Ginny & Georgia is not too bad for some background noise, but it definitely would not be top of my list.