A nostalgic play on how streaming killed the video store.

All Images by Rosie Hastie and Lucy Parakhina

This program needs an audience to survive and thrive, as all art does. You should be a part of that audience. If for no other reason that this stuff is good, and different.

'Coil’—created by Steve Wilson-Alexander, Solomon Thomas, Carly Young and Mark Rogers, members of the re:group performance collective—starts as more of a TED talk or stand-up comedy set than a play. The projector screen to the left upstage makes sure we never forget the formal and technical transcendence the piece aims to achieve. The actors declare at one stage ‘Let’s make a film!’. Despite this, the show conceals its true nature for some time.

The Story of 'Coil'.

The play tells the story of a dying breed of business - the video store - and I doubt anyone will protest if I pronounce it dead. This story is told to us by one man, played by Wilson-Alexander, with his cameraman, Solomon Thomas off to the side and another actor, Carly Young, at the computer. In between the chunks of narrative monologue, Wilson-Alexander will suddenly get into one of many characters that he plays and his cameraman will film him. The lack of context for, and absurdity of, these filmed snippets adds a great deal of comedy to an already entertaining tale, but it is the narrative structure of the story that acts as a throughline to the work. For at least the first half I was left in the dark as to the purpose of the filmed snippets. What was clear was a parallel narrative of the making of the play itself. The performers of this work are remnants of a theatre group that upon their formation within university, was 5 times the size, with a total of 15 members. It is not just the parallel here, of two delivery methods of art, the video store and the theatre group, facing the prospect of dying off which fascinates and provides food for thought. It is the way in which one survived, and one is a remnant. Not one of a stranger either, but of a dear relative long since passed. The lesson ultimately is that the theatre can twist, contort, bend- in a way that the video store can’t. The theatre can transform into a video store, a mansion, or anything other setting imaginable in a way that the video store can’t. 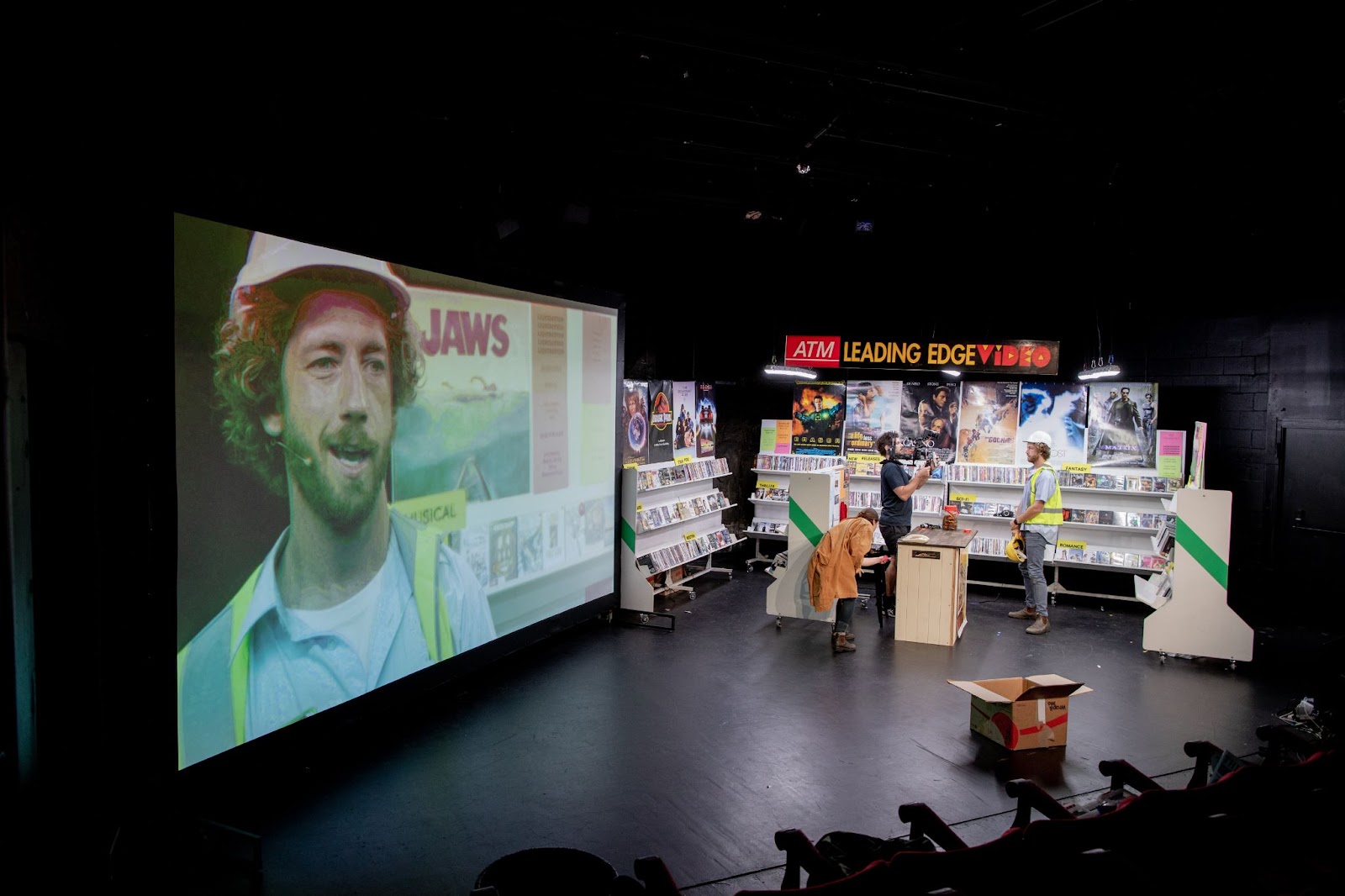 A Rejection of Traditional Theatre

Watching the actors in the filmed segments shoot into motion and heave themselves into position for the camera and perform in character is supremely entertaining, but it is the mystery that hooks us. Mystery not only regarding the film being built piece by piece in front of our eyes, but also regarding the manner in which it will tell its story. Then there is the fourth wall which, for the duration of the TED talk section I described, is non-existent and repeats throughout the rest of the show too.

In fact, the fourth-wall never feels like it is there. The meta film/play feels like a natural extension of the story told to us in the opening scene. It is told from the perspective of an employee of the video store at a time when it was clear to all but him that the store’s days were limited. He runs into an old friend and former co-worker played by Young. His attempts to persuade her to come back to work sounds a lot like what we imagine this trio of actors/filmmakers would sound like trying to convince members of their once 15-person-strong group to come back. The parallels between the story of the troupe and of the video store collide here. There is genuine sadness instilled within their work that is only possible due to their similar position with the video store. Even the delightfully absurd meta-film Coil, of course being this piece’s namesake, bares thematic similarity with these elements. It is the story of a man who travels through time as a lawyer defending the great monsters of history, and ends up falling in love with himself. The use of time travel, as well as the utter chaos that its use causes, conveys just how destructive it can be trying to sticky tape something back together. Something like, say, a theatre troupe whose members are moving in different directions, or a business that has been left obsolete by changes in technology.

Dealing with the Extinction of Video Stores & Performance.

Half of this story, more or less, is shown on stage whereas the other half consists of those clips recorded earlier which are screened in the final moments of the show as a cohesive film. While still very absurd, knowing the context of these clips was satisfying in a very traditional way despite its original presentation. To succeed in this regard is more than enough for me to say this work’s grasp is equal to its reach. The way in which it intertwines the rather sad tale of the beloved video store with their own struggles as actors adds great ethos to the tale they weave. This inspires rather dour feelings but also shows us one way to survive such a ‘narrative-form extinction event.’ Up on stage are three people, hardly enough to perform a traditional play. Rather than giving in and limiting themselves to three-character play, the team behind ‘Coil’ decide to evolve. This is innovation by necessity. Innovation and evolution are not straightforward but are far better alternatives than extinction. The strangulation of theatre is nothing to be celebrated, but art always flourishes under constraints, and ‘Coil’ is no different.

The film/theatre hybrid piece speaks to this need to adapt through the central character who refuses to move on, pushing away those who have left the stage of life he hangs onto. In showing us the lessons that the death of video stores offers us, ‘Coil’ is able to survive similar challenges in its own field. Moreover, the creative team’s triumph in the face of those who would see theatre go the same way as the video store demonstrates that while you can kill an artist, you can’t kill art, or stop it being made. 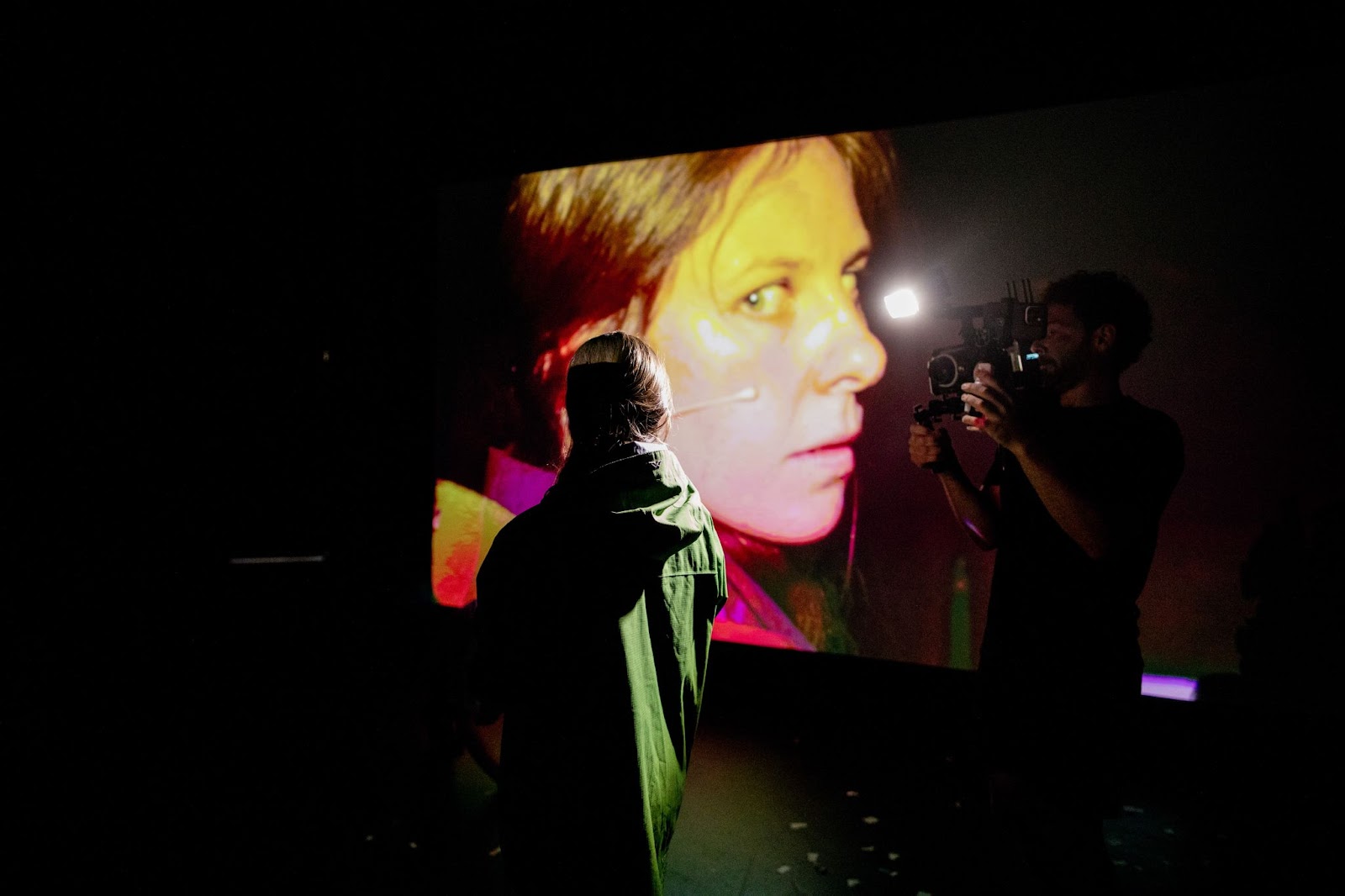 ‘Coil’ was part of The Opera House’s Unwrapped season, a program that began in 2018. Unwrapped is a platform for independent artists to showcase new fresh and risk-taking works across multiple mediums such as theatre, live art, music and so much more. This program needs an audience to survive and thrive, as all art does. You should be a part of that audience. If for no other reason that this stuff is good, and different.

Billy Moran is a student of English and Creative writing from Regional New South Wales. A budding writer of nearly every form, you’ll likely find him brainstorming one of his many side projects. He loves Thai food, Fantasy fiction and any piece of fiction or entertainment that gives a sense of discovery and originality to its consumer, despite his love of routines. Billy is currently directing a short play for the UNSW Theatrical Society’s ‘Whose Play is it Anyway?’, his sophomore writing/directing gig.