mental health at the 2020 tokyo olympics

With the ‘weight of the world on her shoulders’, Simone Biles’ shocking exit at the Olympics Women’s Gymnastic Finals is a raw testament to the state of athletes’ mental health during the games. Odelia sheds light on how the GOAT is revolutionising mental health in sports.

Star gymnast and the GOAT, Simone Biles, pulled out of the Women’s gymnastics final in Tokyo due to mental health concerns after baulking her first attempt on the vault on Tuesday night. Bile’s decision to withdraw from the competition reveals the toxic culture of the Olympic games, as looming expectations and hard-hitting pressures continue to harrow athletes. It also tells us more about mental health, that we should embrace athletes who are brave enough to step down when their body and mind are at risk.

Biles, who won gold on the vault in Rio 2016, has been known to tackle precarious moves that no other female gymnasts dare to attempt, especially when she became the first woman to land a Yurchenko double pike at US Classics earlier this year.

Unfortunately, the four-time gold medallist, who is likened to perfection, completed only 1.5 rotations instead of 2.5 in her first vault on Tuesday. Her hesitation and expectations, melded with the pressure-cooker environment of the Games resulted in a jarringly shaky performance that shocked the world.

With a ravishing history of years of national and international championship domination and five Olympic medals at the mere age of 24, it's no wonder people were stunned when the GOAT stepped down for the sake of her team, and her health.

“It’s OK sometimes to even sit out the big competitions to focus on yourself because it shows how strong of a competitor and person that you really are,” Biles explained to the media after USA took home silver in the finals.

“I just felt like it would be a little bit better to take a back seat, work on my mindfulness and I knew that the girls would do an absolutely great job and I didn’t want to risk the team a medal for my screw ups because they worked too hard for that.”

The team’s defeat to the ROC on Tuesday marked the first time the USA had lost a gymnastics team final in an Olympics or a world championship since 2010.

Biles’ performance likely credits to her social media post alluding to the pressure of performing at the Olympics after preliminary qualifications. 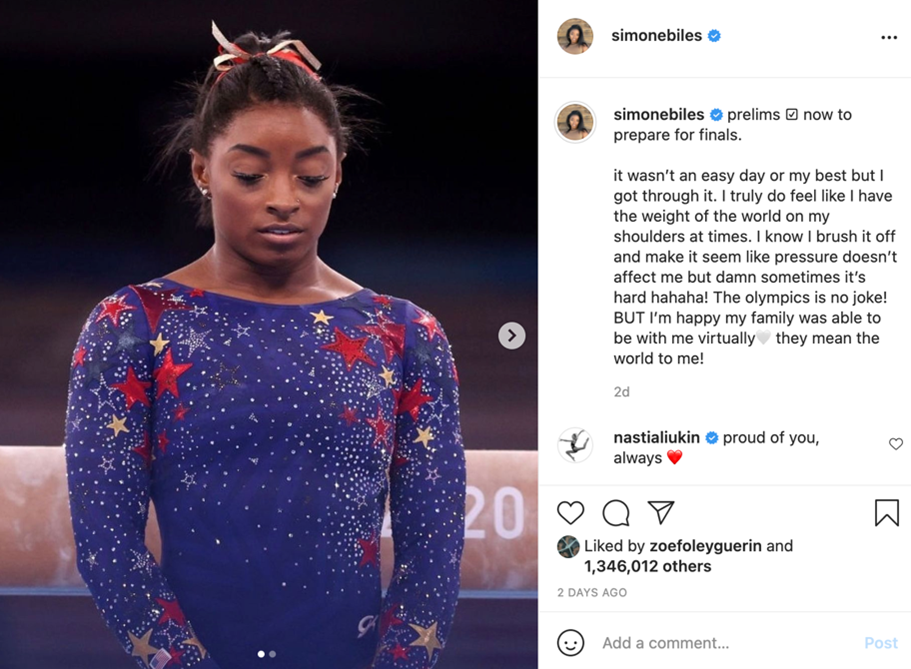 "I truly do feel like I have the weight of the world on my shoulders at times,” she wrote.

She elaborated on those comments when she faced the media in Tokyo, saying that the pressure of expectations remains heavy, as reported by the ABC.

"There were a couple of days when everybody tweets you and you feel the weight of the world," Biles said.

"We're not just athletes, we're people at the end of the day, and sometimes you just have to step back.”

Fans and supporters, amongst other influential names have rallied around Biles after her exit. 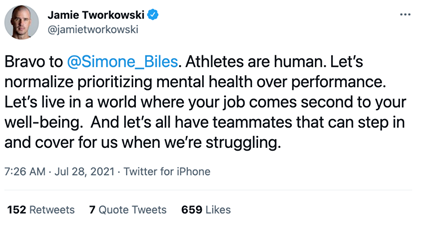 “Athletes are human. Let’s normalize prioritizing mental health over performance. Let’s live in a world where your job comes second to your well-being,” New York Times Bestselling Author Jamie Tworkowski tweeted. Michelle Obama also rooted for Biles when she tweeted her pride and support for the athlete.

Former Olympian and winner of 28 medals, Michael Phelps, told NBC Philedelphia that although the news broke his heart, mental health has been an emerging topic over the last 18 months.

"We’re human beings. Nobody is perfect. It is okay to not be okay. It is okay to go through ups and downs and emotion roller coasters. But I think the biggest thing is we all need to ask for help sometimes, too, when we go through those times," Phelps said.

However, Biles’ decision is not without some controversy.

“Are ‘mental health issues’ now the go-to excuse for any poor performance in elite sport? What a joke,” he tweeted. Conservative writer Amber Athey labelled Biles a “quitter” while podcaster Charlie Kirk called her a “selfish sociopath" and a “shame to the country”.

Earlier this year, we’d seen other athletes step away from competition for nonphysical reasons. NBC reported, young black athletes are now, more than ever, setting the stage to revolutionize mental health.

Olympic gold medal-winning swimmer Simone Manuel also spoke openly about taking a break after being diagnosed with overtraining syndrome earlier this year. Tennis star and four-time Grand Slam tournament winner Naomi Osaka withdrew from the 2021 French Open Tournament and Wimbledon in June, citing mental health reasons. In July, Sha’Carri Richardson, winner of women’s 100m race at Olympic Trials, was banned from the games after testing positive for marijuana, which she admittedly used to cope with the death of her mother.

Biles is nonetheless part of a generation of elite Black athletes who have taken their mental health into their own hands and are not afraid to speak openly about their struggles.

While we have not necessarily seen these athletes at their best, we have indeed seen them at their truest.

As Australian gymnast Mary-Anne Monkton told The Age and Sydney Morning Herald, these athletes are collectively “sending a message to the world that it’s OK not to be OK.″

Writer's Bio: Odelia Tham is a student at UNSW studying a double-degree in Media (Journalism and Communications) and Law. She is an avid sports enthusiast, gym junkie and fantasy book nerd. Her coolest sporting experience to date is when she watched the NY Knicks and LA Clippers go head to head at the Staples Center! In her downtime, she loves writing book reviews, binging Netflix, swimming in the ocean and drinking dirty chai lattes.