The BTS Army: A Cult?

DISCLAIMER: This article is not meant to offend and should be taken in a light-hearted manner. The author of this article is an ARMY and would do anything for Kim Namjoon.

The Adorable Representatives M.C for Youth (ARMY), also known as BTS fans are an infamous fandom. ARMY is a phenomenon that has been seen time and time again when a boy band hits peak stardom, similar to “Directioners'' or “Beliebers”. One could also say the BTS fandom is potentially a cult. Let's investigate…

For a cult to exist it must have a leader, someone to look up to, usually a cult leader needs great charisma:

For a cult to exist it must have have propaganda:

For a cult to exist is must have recruiters:

History - From its Founding to Western World Domination

ARMY is gaining control of not only the internet, but the entire globe! Recently it has expanded from South Korea to the United States, the UK, and our own Australia.

If it weren't for the leader of the group—RM (Kim Namjoon)—and his ability to speak fluent English, the fast, exponential growth rate of ARMY would probably never have happened. BTS began to cater to a new audience to spread their music. Their 2020 song "Dynamite", was the first English song of BTS, successfully creating new English-speaking fans. And less than a month ago BTS released their second English single called “Butter.” This was tailored for the English ARMY because most people find it difficult to enjoy BTS’s music or K-pop music in general due to the language barrier, but these songs have solved this problem. If BTS wanted to grow their fanbase (achieve world domination) what better way than to release music in the language most commonly spoken and understood in the world! That’s some big brain energy!

Having now released two English songs, BTS have truly set the bait and it seems like people are eating it up and falling into the trap. BTS has become so popular that they have collaborated with McDonald's to create the limited edition BTS meal. It caused a sense of hysteria within the fandom, and many fans began to do extremely questionable and drastic things with their meals. The meal consists of 10 nuggets, chips and a drink but what makes it different is the two “special sauces" which are cajun and sweet chilli sauce

After surveying various social media platforms I have seen people make key-chains and phone cases out of the sauce wrappers and the bags that come with the meal. People are displaying their literal rubbish in their rooms and forming a shrine out of the meal. But fans have also done cute and creative things with their meals, like using the meal wrappers into scrapbooking tools. But... if this isn't cult-like behaviour. I don’t know what is… 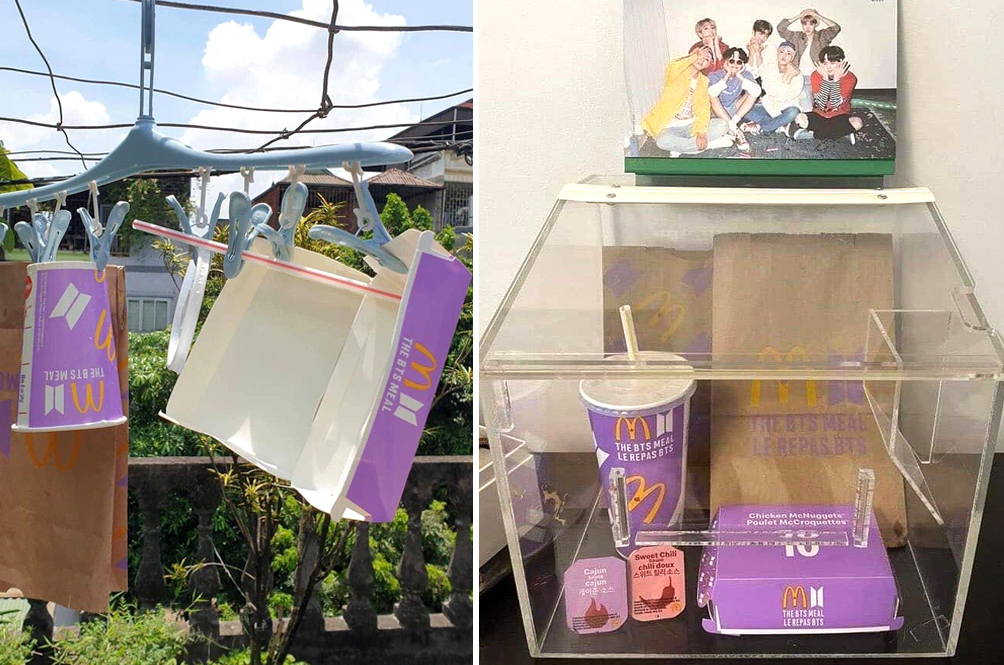 In all honesty, is the BTS fandom worth joining? Sure, why not! Most members of ARMY are nice even if some may be obsessive and have questionable behaviours but honestly, a fandom shouldn't turn you off from what you enjoy. If you enjoy the music and the vibe that BTS brings then there's no harm in joining. Although you may have to be careful who you tell.