AN INTERVIEW WITH FILMMAKER, CORNEL OZIES

The murder of George Floyd on the 25th of May 2020, caused a world-wide eruption of protest against police brutality. So, I sat down with Cornel Ozies, director of Our Law to discuss Black Lives Matter, Indigenous rights, and his documentary.

Our Law is one of the featured documentaries of the 2020 Sydney Film Festival. Our Law is a documentary about the only Indigenous-run police station in Western Australia, and asks questions of policing within the Indigenous community. Ozies notes that “Our Law focuses on the restoration of the relationship by exploring ideas of respect, understanding of cultural differences, communication, and education.”

Recently, there have been discussions around the lack of attention towards the similarities of police discrimination between America and Australia. I wanted to find out if Our Law could help us in understanding what is missing between; the police force, and their community in Warakurna.

Warakurna is a community located in Western Australia its police station consists entirely of Indigenous officers; Sergeant Wendy Kelly, and Sergeant Revis officers. These officers have been educated on the cultural practices in the community, and taught us that at the core of this success lies; respect, understanding, and communication.

You can watch Our Law on NITV on Karla Grant Presents on Monday 22 June at 8.30pm.

Carla: Firstly, what were your inspirations, and aims of this documentary, what inspired you about this community ? Was it the efforts to get along with the police ?

Cornel: You do not hear many positive stories about Aboriginal police related relationships, and for me being one it was like “oh my god breath of fresh air” and I am going like “why is this not happening everywhere.” If you can make a documentary one or two people watch it, and it changes them, then great!

What is the main model, or like the recipe that you have for the future, what did you learn from this experience?

I learned the 3 elements that will help change or enrich a person it is: respect, deep listening, or understanding and communication. Those simple steps will make you a better person, and it will also make you more effective in any interactions you have in life.

I do not know too much about Indigenous culture, but to my understanding, elders are greatly respected in the community, do you think maybe that this respect is missing in the general police force?

I think that, that point of view is missing from any conversation to do with Indigenous people, because you have a Minister for Aboriginal Affairs who is white.

The main thing is that they are actively engaging with communities, they are putting their ‘boot to the ground’, and being seen in the community, interacting at the local supermarket, Senior Sergeant Revis Ryder is the coach of the local football team. Sergeant Revis Ryder in his own time, when he's off duty he will go out, and collect wood for the elderly ladies that can not it, so that they can have warmth. Sergeant Wendy Kelly is actively involved in the women's shelter that's in Warakurna.

Yes, They do not have to do these things in their own time, I mean they are pretty much on the clock twenty four hours at the police station, because they are the only officers there, it just shows that they go beyond the badge. They show real human connection to the community, it is not superficial you know and the community respects them.

Australia has a Sorry Day on the 26th of May, I was wondering do you think this is enough ? Because I feel that actions matter more than apologising. Do you think there should be more done?

Saying sorry is the first step towards the right direction, the next step is truth telling.

Australia is oblivious to its real history. I mean you have got our leaders who are saying: “Thank god we are living in a lucky country, and we are not like in America over there, and we should not be importing American problems into Australia.”

There are parallels between Australia and America, and there are issues here that have not been dealt with. When you are taught that Australia was settled, and not invaded then you are only setting up a one-way of thinking about Indigenous people. If you are saying; we were settled, and not invaded then our value, and our life is not as equal. This is why I always bring it back to education, if you are educated with a cultural standard, and you are giving a political and historical context of race relations in Australia then you are more informed and you will be more equipped to have a proper conversation. The sad thing is with the Stolen Generation is that we have now more kids being taken away from Aboriginal families now, than when that policy was around. There is a staggering amount of kids being taken away, and being put in foster care, and it is not focussed on it. What they want to celebrate is Captain Cook discovering Australia.

Again that word ‘discovered’ Australia - how can you discover something when there is already something there.

Do you think there should be more representation of Indigenous and Torres Strait Islander people within the police force?

If you are policing a more heavily populated area like in Western Sydney, then yes the police force should reflect that, but you know there might be places around Australia where the population is not as densely populated by Indigenous people, you do not really need a program like in Warakurna but when you are in a remote community where the Aboriginal communities consists 100% of the population, you need to reflect that.

I remember when I first came to Australia, there was a protest going on outside of the courtroom in the CBD, and it was because of issues relating land right, and it was sad because I feel like there is just not enough representation of Indigenous people, so it is a minority fighting against a huge white population, whom frankly seem to not care, which is quite sad.

When you produced this documentary did you know that the Black Lives Matter Movement was going to erupt so soon ? Did you have a feeling something was going to happen, or did you have no idea?

No, we filmed this last year, it was a while before anything started to erupt, but having said that while we were filming two weeks into our filming Joyce Clarke who is an Indigenous women in Geraldton was shot by a police officer, and to this day the police officer has not been convicted for murder. And then a couple months later while we were in the emptying process of this, Kumanjayi Walker in the Northern Territory was murdered in his own house by police officer. So while we are filming, and while we are editing we realised the importance of this documentary in the context to what is happening.

Do you think the interpretation of the audience will change from what you had originally intended ?

This will be more of a conversational piece it will spark conversation, and it will influence policy change, because everyone is looking at this problem right now, but there are not many solutions being thrown out, and you know this is the possible solution. It is not the end or the ideal solution, but it is a step towards the right direction, and even if they watch this documentary and go, "we did not know programs like this existed." If you can spark a conversation around a film, then I think you have done your job.

Because the actual institutions have engraved and institutionalised racism, it is acceptable to use a bit more force against a person of color. There are 437 black deaths in custody, and not one conviction? So, we can have a Black person die in custody but it does not matter because it is only 437, right? You do not get a moral scale if you are Black. It is accepted that you can be a bit more rough with a Black person. I mean if you know the history of Indigenous people we were classified as flora and fauna, it was not until 1967 that we were brought into the constitution.

What are your hopes for the future of the Indigenous community here in Australia?

I hope that they look at what is going on in the world, and realise the issues that we have the same issues here in Australia. I hope that the education system comes on board with the truth telling of Australia's real history, and I think if you have a generation of children who come through the education system in Australia with that knowledge you are going to find you have a better society at the end of it, I think.

What were some of the most memorable moment you had shooting this documentary ?

One of the most memorable moments, was that at the time that we were filming there was a death in the community so they were having a funeral what they call Sorry Business. Traditionally, you pay a lot of respect: shops close at a certain time, allowing the family to grieve, they have a particular site where the close family can camp out and all that sort of stuff, and usually as an outsider we are not welcome to all that kind of cultural practices, but we had build up a relationship that we were still allowed to film while all that was going on. But it goes to show how important the Warakurna community thought, the documentation was to accommodate us to be around while the cameras filming, and no one got upset about it, because they saw the importance of the documentary. The highlight for me was seeing the acceptance from the community towards us.

Would you say the experience you have had in Warakurna has changed your perspective of the police force? or is it just that community ?

It did not change my perspective, because it is still a long way before things get addressed in the police force, but yea it gave me hope that there is a change coming. I am happy to talk about it because it does not get talked about enough.

Lastly, I feel like that the recent COVID-19 outbreak has shined a light on the reality of inequality, and as we have seen that the virus is impacting people of color more. Would you say that this is whole movement is also an outcome of the obvious inequality differences in our societies. Would you say that the Black Lives Matter movement is a backlash of the injustices that are occuring, or is this its own independent movement?

It is separate from COVID-19, but I guess because of COVID-19, everyone is at home they are more self-reflective more people are actually tuning in to social media, because they do not have the normal ‘cafe conversations’ and you know the world is watching, there are more videos, more evidence of police brutality coming out. it is being splashed everywhere on social media, so people are more aware during lockdown.

Audiences can watch Our Law on NITV on Karla Grant Presents on Monday 22 June at 8.30pm 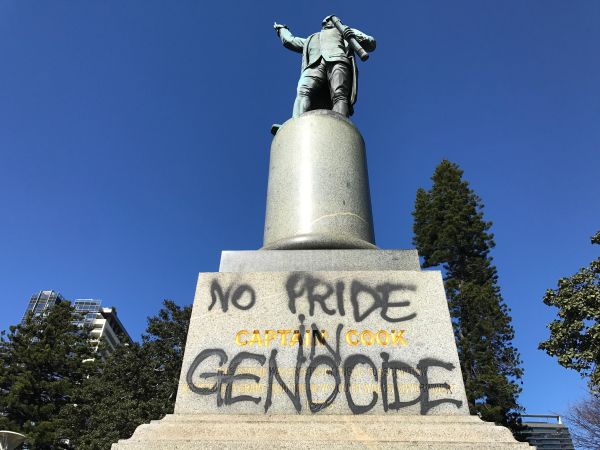 Statues Are About Glorification and Reverence - They Were Never About History

Marc investigates the role of bad faith arguments in relation to historiographical questions about statues and their place in the historical narrative.

In light of the Black Lives Matter movement in the US, we have a responsibility to reflect on our own history of anti-blackness in Australia. Tasnova guides us through Australia's treatment of First Nations people.

Bernie Sanders, the democratic socialist who campaigned for the working class, ended his presidential campaign just over a month ago. But Sander's legacy will undoubtedly change the landscape of American politics in the years to come. Marc takes us throug