STREAMING SUGGESTIONS: WHAT YOU SHOULD BE WATCHING IN MAY

While I assume most readers will have at least one of the popular streaming services, I understand that some don’t, so I have also included excellent free services such as Kanopy (UNSW) and SBS on Demand.

The Japanese cyberpunk successor to David Lynch’s Eraserhead, Tetsuo is a cult film in the truest sense of the word. Uncompromising in its filmmaking and ideas, it is Shinya Tsukamoto’s masterpiece, and clocking in at under 70 minutes, it's a (relatively) easy watch. The film follows a businessman and his girlfriend who accidentally hit a metal fetishist with their car, and are subsumed into his nightmare of machinery. It doesn’t make a lick of sense, but that’s ok, it doesn't need to. Tsukamoto’s sheer hard work and brilliance in the design and shooting of the film are enough to hold your interest for the length of the feature. Give this film a go. You’ve never seen anything like it.

“Together, we can turn this fucking world to rust!”

Steven Spielberg’s late masterpiece, AI is a really beautifully made film with a great emotional core. Originally a short story, ‘Supertoys Last All Summer Long’, the project was first developed by Stanley Kubrick. Kubrick found that it was more to Spielberg’s sensibilities, and so passed the project onto him, and it seems to have been the right call. The film at its very core is a cerebral retelling of Pinocchio, but now with a much more profound, metaphysical twist. Haley Joel Osment is great in his unblinking performance, and the supporting cast play a set of memorable characters that the protagonist meets along his journey. Brilliantly made, the film was released to a rather muted reception, but now is gaining a reputation as one of the great films of the 21st century. AI makes us ask questions about the very nature of our existences, with Osment’s character as a focal point of examination for the audience. Can something humans have programmed to display love, and act it out, ever really feel it? And perhaps a further, more pressing question; does it matter?

Bong Joon Ho proves himself as an especially strong filmmaker with Parasite, demonstrating a mastery in pacing and storytelling. Since the early 2000’s, Joon Ho has released a string of some of South Korea’s greatest contemporary films, with his magnum opus being Memories of Murder. Parasite, although not quite as emotionally resonant as Memories of Murder, is an example of great cinema that everyone can enjoy. The film follows a lower class family that slowly integrates itself into employment with a wealthy, upper class family. The script is incredibly strong, the first half of the film playing like a perfectly paced thriller, and when the 2nd act twist comes in, everything is thrown up into the air, nothing is predictable. The themes of the film however, are unoriginal and only ever superficially explored, and such ideas of class disparity have essentially been done to death since the very beginning of cinema (see: Metropolis, Bicycle Thieves and even Bong Joon Ho’s previous film, Snowpiercer). Despite this, the experience of watching this film is delightful, and it is doubtless one of the best movies from 2019.

“You know what kind of plan never fails? No plan. No plan at all. You know why? Because life cannot be planned.”

Bollywood films tend to be silly, tonally messy, and indulgently long. This film is no exception. Don’t let that dissuade you however, this is a finely made film. The film follows 3 engineering students who have enrolled in a prestigious engineering school, and their continued mischief when faced against an iron-fisted headmaster. The superficial problems of the film, such as unmotivated, excessive musical sequences and asinine gags can be overlooked by the sheer strength in screenwriting that this film displays. Everything is paid off, the frame narrative works, and the climax is really satisfying. Furthermore, the film actually has some social commentary to offer (although it provides about as much wisdom as a fortune cookie), and it is the crux of the film; acting as a didactic story about the attitudes toward education in contemporary India. Those who are looking for an entry point into Bombay Cinema/Bollywood, you are in sure hands with this film.

Michael Mann’s strongest film. He tried filming this story in 1989 with the TV movie L.A. Takedown, a failure on most terms, but this film shows what Mann was able to do with a bigger budget, and a better grasp of filmmaking, using the same story. Of course the selling point of the film is Al Pacino and Robert De Niro playing off each other, and they are brilliant in the film, but Val Kilmer and Tom Sizemore play unforgettable side-characters. The film is incredibly strong, narratively compelling and has the best bank robbery scene in film history.

Werner Herzog’s most famous documentary, is based on the story of Timothy Treadwell, a man who lived among a tribe of grizzly bears in the Alaskan wilderness. Herzog is a legendary filmmaker, and this is an excellent entry point into his documentary work; an exploration into the mind of a misguided outcast. This film is one of the great recent documentaries, and you might come out of morbid curiosity for the ‘grizzly’ details (Treadwell’s severed arm was found with the watch still ticking), but you’ll stay for the philosophical musings on the nature of humanity. For those who watched Tiger King, this is a fantastic documentary that further goes into the mindset of the people who believe they can cohabitate and mingle with wild creatures, and romanticise the one-sided relationship they have with these creatures, whose only feelings are of “overwhelming indifference”.

“I believe the common denominator of the universe is not harmony, but chaos, hostility, and murder.”

Though it is by no means Hayao Miyazaki’s masterpiece, Porco Rosso is nonetheless a hidden gem in his canon of work, and a really nice, light watch. The film follows a veteran fighter pilot who has been turned into an anthropomorphic pig (hence the name Porco Rosso, literally Crimson Pig), and his travails as a bounty hunter. The film is light on plot, but the Miyazaki charm is there, and you can see the love he has for the setting and the aircrafts (Studio Ghibli in fact is named after the Italian aircraft ‘Caproni Ca.309 Ghibli’). Miyazaki’s painterly recreations of the planes is loving and really delightful to see, and accompanied with Joe Hisaishi’s jazzy score (the song ‘Bygone Days is especially wonderful), the film is a leisurely and joyful experience.

Side note – Watch the film with the English dubbing, Studio Ghibli films always have great dubs.

This was the film that Clint Eastwood seemed to be waiting to make his whole career. Eastwood hadn’t quite fallen into the directorial minimalism of his later efforts, but there is definitely a sense of the atrophy of the western genre especially prevalent in his style. Things are coming to an end in the world of the film, Eastwood’s character is an aging man whose life can essentially be summed up by Al Pacino in The Godfather 3, “Just when I thought I was out, they pull me back in”. Morgan Freeman and Gene Hackman are great in their roles, Hackman turning in one of the finest performances of his career, and Freeman bringing his usual earnestness. The narrative is compelling, the characters legendary, and the style, masterful. This is Eastwood at his best, and the film is strong as hell.

The Tillman Story is a well-made piece of documentary filmmaking that is essential viewing for those interested in politics. The story of Pat Tillman may be unfamiliar to many young Australians, however it is an important one that strikes to the very core of how our political institutions will do anything they can to bolster their own image, regardless of the legacies they destroy in the process. The documentary itself is a solid piece of journalistic filmmaking, lean in storytelling and unassuming, if not conventional. The film is especially relevant now, as much as it has ever been with politicians continuing the false narrative of Tillman as a patriot (in reality he had become a staunch critic of the Iraq War), hijacking his legacy in the name of justifying their own wars. This is a great contemporary political documentary, exposing much of the hypocrisy and lies inherent within not only the US government, but also the US media.

“He was a human being. And by putting this kind of heroic, saintly quality on him, you're taking away the struggle of being a human being.”

One of the great British films, The Red Shoes is a result of the much acclaimed Powell and Pressburger partnership, whose other efforts include the legendary Black Narcissus and timeless A Matter of Life and Death (both also available on SBS on Demand). The film is a kind of meta-adaptation of the original Hans Christian Anderson story, with the story itself working both in the world the actors, and the production they dance in. The film concerns an up-and-coming ballerina who must choose between greatness or love. Moira Shearer plays this woman fearlessly, and turns in a terrific performance. The dance sequences themselves are beautifully choreographed and are inflected with surrealism and a fever dream-like quality. A definite recommend to those interested in ballet and British Cinema.

“Don't forget, a great impression of simplicity can only be achieved by great agony of body and spirit.”

Perhaps Wim Wenders’ most iconic film, Wings of Desire has one of the great cinema premises, and plays out as a beautiful poetic journey. Bruno Ganz (see: Hitler) plays the protagonist of the film, an angel who observes the humdrum of daily life in Berlin, but longs to participate in the world, to touch someone, and to feel, the character eventually falls in love with a trapeze artist: the impetus for his longing to change. The film is followed by a lesser sequel, which continues the story, but it is superfluous, this film is a singular piece, and the narrative is secondary to the poetic and philosophical musings of its characters. This is a film that everyone should have on their watchlist.

“What is it about peace that its inspiration is not enduring? Why is its story so hard to tell?”

Paul McGann and Richard E. Grant star in this inimitable British comedy, known as one of British cinema’s biggest cult films. In the late 1960s, the two travel to an Uncle Monty’s country cottage for a holiday, but it proves to be less of a holiday and more of a farce. The performances by Grant, McGann and Richard Griffiths are amazingly funny, and they turn what could be slapstick idiocy into a transcendent kind of comedy. The difference between this film and many other comedies is that its jokes can never fail, because it was never trying in the first place. It's an effortlessly funny piece of filmmaking, and one that holds up marvellously.

“Hairs are your aerials. They pick up signals from the cosmos and transmit them directly into the brain. This is the reason bald-headed men are uptight.” 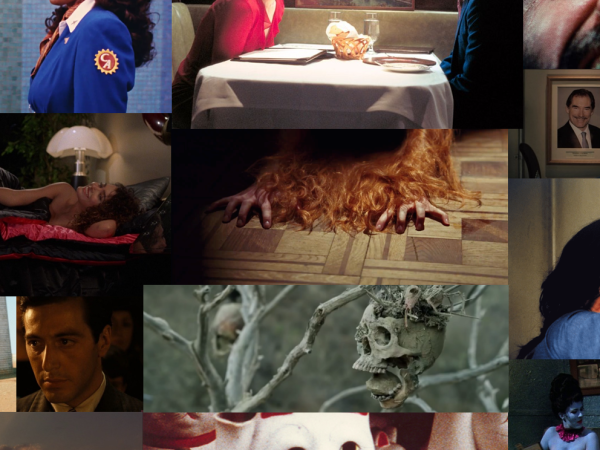